Many users have reported that their PC is running extremely slow after installing the Windows 10 2004 update, or after installing the new Chromium-based version of the Microsoft Edge browser. If you 're facing one the above mentioned problems, follow the instructions on this article to resolve them.

Problem in details: After you upgrade Windows 10 to version 2004, or after you install the KB4559309 update, which automatically installs the new Edge browser (Chromium version), the Windows takes a long time at boot process or is running very slow.

The first method, to resolve the slow performance issues in Windows 10 is to perform the following steps:

The second method to fix the slow performance problems in Windows 10, is to uninstall the Microsoft Edge Chromium version (if it is installed).

Step 1. Check if the new Chromium-based version of the Microsoft Edge is installed.

1. From the Start menu

and click Apps.
2. If the Apps & Features locate the Microsoft Edge app and according its icon proceed as follows:

To uninstall the new Chromium-based Edge in Windows 10:

1. Navigate to the following folder on your PC: *

* Note: The folder name "85.0.564.41" indicates the installed version of the new Chromium version and may differ at your PC.

2. Select the folder path in the address bar, and right-click > Copy.

* e.g.: At the current example, the command will be:

4. Now, give the below command (Copy/Paste) in command prompt to remove the Chromium version of the Microsoft Edge browser from you PC.

5. Once the above command is executed, the old version of EDGE will be activated again. Restart your PC to apply changes.
6. After restart, proceed to install manually the new Chromium-based Edge browser on your PC, in order to avoid installing again the problematic KB4559309 update.

1. From the Start menu

2. Choose Recovery on the left and then, under the 'Go back to the previous version of Windows 10' section, click the Get started button. 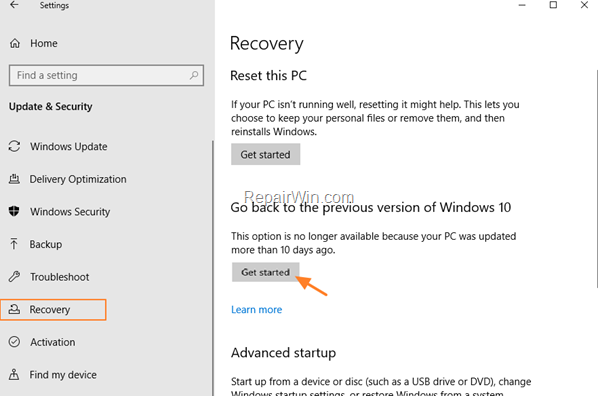 The next method to resolve the slow performance issues in Windows 10, is to repair Windows by using the SFC and the DISM commands:

1. Open Command Prompt as Administrator.
2. In command prompt give the following dism command and press Enter:

3. When the DISM operation is completed, type the following command and hit Enter:

4. Now wait until the System File Checker repairs the Windows System Files.
5. When this done, restart your computer and see if the problem is solved.

If this article was useful for you, please consider supporting us by making a donation. Even $1 can a make a huge difference for us in our effort to continue fighting spam while keeping this site free:

« How to Prevent Edge Chromium to be Installed Automatically in Windows 10. » FIX: The Password is incorrect after Update in Windows 10 (Solved)